I am reposting this blog which originally appeared when I was Executive Director of the Center for Game and Simulation Based Learning in Albany, New York. Stefan’s blog talks about and describe the important of MODs and the use of classic texts, in this case Shakespeare’s The Tempest (1616) as a springboard for designing interactive learning experiences. This post will lead into Stefan’s upcoming blog on a German game celebrating the 500th anniversary of Martin Luther’s world changing accomplishments ushering in the Protestant Reformation in Europe. I will soon be blogging about the role of interactive fiction as a learning experience as well. David Seelow, PhD 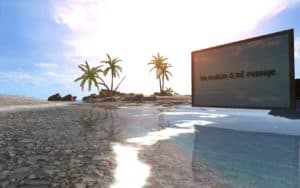 The Beach on Prospero’s Island

Before returning to the topic of repurposing/modification, my second thesis is that game-based learning should not only convey knowledge (facts) and skills (using knowledge to solve problems), as most so called serious games do, but offer players to experience different perspectives while interacting with a virtual world. This way, for example, students can [explore](http://www.gamindex.org/game-reviews/the-stanley-parable) complex literary concepts like the unreliable narrator and fictionality by choosing their ways through the maze in The Stanley Parable. In my own work, I experimented on how to give students a new access to a literary classic like William Shakespeare’s play The Tempest, thus trying to convey (perspectives on) culture as well through game-based learning. Instead of making the story of the drama playable, I decided to assign players the role of Caliban after he is left behind on the island at the end of the play in the latest version of the [SturmMOD](http://www.moddb.com/mods/stefan-khler/downloads/sturmmodv121-caliban-edition), a modification I developed for the first person shooter Far Cry (2004). 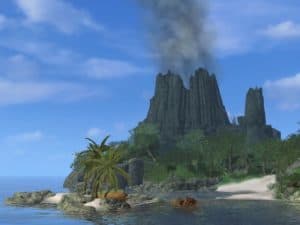 Exploring the virtual recreation of the island (drawing upon vague descriptions in the play), players not only encounter Caliban’s comments and memories in spoken and written form at places that are important to him, puzzling together what happened before, but can also make experiences by interacting with the environment. In one crucial case players can enter a tent and find a woman standing at its rear end. As they draw closer to her, they hear a heartbeat getting louder. When the players, however, get too near, the woman disappears, and Caliban finds himself at the rock the magician Prospero confined him to after what Prospero perceived as an attempt to rape his daughter Miranda. The described experience may make students wonder about whether Caliban really did “seek to violate/The honour of [Prospero’s] child” or if it was rather a misunderstanding because the uncivilized Caliban was not used to keep distance towards people he is interested in. After all, the students also followed their curiosity and that way may end up reflecting implicit rules of conduct and why they are not applied in a virtual world.

Yet, my third and last thesis is that the next level of (critical) learning may be not only to experience topics in interaction but to understand that the experiences possible, despite their apparent freedom, are predetermined by underlying systems of rules ([more on the topic](http://www.arts.rpi.edu/~ruiz/EGDSpring10/readings/RhetoricVideoGames_Bogost.pdf)). Therefore, students should be enabled to express their own perspectives on things, either by editing existing interactive experiences (fun fact: The Stanley Parable also started out as a game modification for the first-person shooter Half-Life 2 (2004) before being released as a standalone title) or by developing their own projects. In a [study of the DARE Collaborative](http://darecollaborative.net/2012/10/27/making-shakespeare-videogames), a British research partnership focused on the digital arts in education, students were asked to do just that, creating their own game levels as an interpretation of Shakespeare’s play Macbeth. As DARE researcher Andrew Burn suggests that “games ask questions, offer choices, pose puzzles, set challenges, rather than simply making narrative ‘statements’”, interactive experiences created by students could again be played by other students and then be modified or lead to own projects and so on, making ‘Playing Shakespeare’ a new and promising mode of continually re-interpreting and updating cultural artifacts.

[Stefan Köhler](https://www.linkedin.com/in/sckoehler) is a writer for serious (among others Serious Games Award 2011 for Winterfest) as well as not so serious games, interested in teaching and learning through interactive experiences as well as a lecturer and writer on modifications for games (e. g. for the German bookzine [WASD](http://wasd-magazin.de)).