Skip to content
Home » Blog » Uncategorized » Being onto Martin Luther

Stefan Köhler’s last guest blog “Playing Shakespeare” begins an extended series of blogs on the learning potential, challenges and limitations of interactive fiction at the intersection of narrative games and literature.  You can read Stefan’s earlier blog here:

In 2017, Germany celebrated the 500th anniversary of Martin Luther’s posting of his 95 these. This event initiated the Reformation movement which had an enormous impact on Christian/European culture. To make Luther’s life and ideas accessible for a modern audience, countless works in all kinds of media have been published. This article, however, focuses on the challenges as well as the potential and problems of interactive approaches to learning by examining three exemplary projects (one of which the author was involved in as a narrative designer). Hopefully, this blog will give readers an introduction to general principles of game-based learning that can be applied to other subjects as well.

Like the posting of the theses, Luther’s escape from Worms, where he had refused to revoke his critical statements regarding the church resulting in his banishment, was an important event in his life. Aiding him and his companions to evade their pursuers is the challenge in the mobile game [Luther – The Journey (2017)] (http://luther-diereise.de), as the actions of the player determine the well-being of each person and whether or not the group is able to leave its enemies behind. 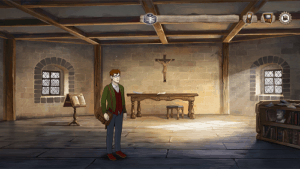 Due to the complexity of managing provisions and morale as well as making the right choices when being held up by several encounters on the way (not to forget under the time pressure of being followed!), the motivation to play the game remains high. On the other hand, as with many serious games that keep players busy with managing a complex system, context and content (in this case information on Luther’s life and ideas) is by design kept minimally invasive in order maintain the flow (who wants to read long texts if one is on the run?) and promote transfer outside of the actual game, for example, offering players the opportunity to read additional information about the characters in the game menu. Consequently, there is the danger that the context/content may be(come) less relevant for the players because their focus is on mastering the gameplay/winning like in the story of the Monopoly board game (https://www.theguardian.com/commentisfree/2015/apr/10/lizzie-magie-invented-monopoly-landlords-game), which actually started out as a critique of capitalism.

Being commissioned by the Evangelical Church in Germany to develop a game for primary and secondary schools about Martin Luther’s life, MMC Games (and the author of this article as the narrative designer in charge) took a different route. Instead of managing a complex system, players here solve riddles by obtaining information through dialogues and combining objects to help friends and contemporaries of the reformer. As the title of the gratuitous point-&-click-adventure, Being onto Martin Luther; German: Martin Luther auf der Spur, 2017(http://schulprojekte-reformation.de/spiel), indicates, it is indeed not possible to personally meet or even play Luther in the game. Instead, information about his life and ideas is embedded in the locations (following the approach of narrative design that not only text and speech but also the game world should be used to convey meaning) and in the stories of the people who are affected by the same conditions that influenced Luther or, even more importantly, were influenced by him. 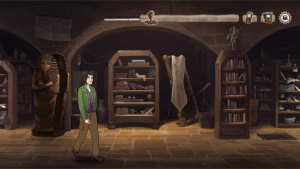 Like in Luther – The Journey, players are given choices that result in gathering different artifacts, in this case for an exhibition about Luther’s life. Furthermore, these artifacts often reflect the players’ decisions regarding moral questions and can thus be used in discussions (in class) that follow up the actual game and enlarge upon what the players have experienced and learned. Still, while interactive stories may offer time to explore a situation and to ponder on one’s experiences and choices, they also bear the danger that players’ motivation may suffer as they can only take preset paths and may feel like having too little challenge/freedom of choice. 1

The third project developed for the 500th anniversary of the Reformation, Pixel Luther (2017, http://pixel-luther.tscs.net), could be regarded as a blend of the two approaches discussed above. On the one hand, players are challenged to manage a complex system by steering Martin Luther in this jump-&-run game, e. g. when he must dodge lightning (surviving this event allegedly made Luther swear to become a monk). On the other hand, riddles, places and characters provide in-game information about Luther’s life. Although the texts are of course kept short in order to not break the flow of the game too much. Yet, what is most remarkable about this project is that it was developed by students. According to their teacher, pastor Tobias Schneider (who helped them with his ‘hobbyist’ expertise in creating games), it was surprising how motivated the students were to do research about Martin Luther and come up with fitting concepts and ideas for the game. This shows that game-based-learning does not always have to be about using serious games, but that letting students give summaries/interpretations of topics in the shape of (small) games may be another interesting way of fostering autonomous learning.

(https://www.gamasutra.com/blogs/FabianFischer/20171213/311360/Solve_et_coagula_Ludonarrative_Synthesis.php) for more information on the difficult relation-ship of story and gameplay).

[Stefan Köhler](https://www.linkedin.com/in/sckoehler) is a writer for serious (among others Serious Games Award 2011 for Winterfest) as well as not so serious games, interested in teaching and learning through interactive experiences as well as a lecturer and writer on modifications for games (e. g. for the German bookzine [WASD] http://wasd-magazin.de).

One thought on “Being onto Martin Luther”