We seem like a country, a world and a species suspended between these two choices, somewhat like T.S. Eliot’s evocation of limbo in “Hollow Men.”1 After two years of COVID-19, the world seemed to echo Eliot’s prognosis that the world will end by a whimper. In other words, we collectively fade into extinction. We would just slowly stop breathing, the oxygen gone. However, 2022 has seen a diminishment of COVID’s impact on society and a resumption of somewhat normal activity. Then, suddenly, but somewhat predictably, a monstrous tyrant of unspeakable evil launched an invasion of Ukraine, a peaceful, democratic nation, throwing the world back some 77 years into a maelstrom of horror. Maybe Eliot was wrong, the world will end in a bang after all, the bang of nuclear apocalypse. We have arrived at the heart of darkness, Mr. Kurtz’s words in our ear, but praying darkness will have lift and we can all climb Dante’s Mount Purgatory rather that descend farther into the deepest circle of his Inferno.

A very small, very engaging, and potentially transformative game can help us make the climb upward, a game of beauty and hope, playable in two hours. The tragedy in Ukraine has rallied most of the world in defense of freedom. Change begins at the individual level, and so this game, A Short Hike, allows students to explore a small, open world in search of transcendence, a view of the world from the mountain top: solitary, at one with nature, removed from conflict, connected to our inner self.

The View from the Top

Reaching the mountain top brings clarity of thought not possible when surrounded by the world’s noise. Hiking through the mountains we are in the realm of birds, part of nature, and close to the sacred. In the mountains we find freedom, and discover peace no money can purchase, no power can claim. The Swiss Alps, in Davos, is where Thomas Mann’s Hans Castorp made his way up the The Magic Mountain (1924) to visit the Berghof Sanatorium where his cousin Joachim Ziemssen sought a cure from the choked world below. In these same Alps, Sils Maria to be precise, Nietzsche discovered his prophet Zarathustra among the clouds. Moses ascended Mount Sinai where he received the Decalogue (Exodus 20: 2-17; Deuteronomy 5:6-21) and Jesus climbed the Mountain of Beatitudes in Northern Israel (Mathew 5: 1-2) where he delivered his most powerful sermon (Mathew 5-7); these two moments giving the Jewish and Christian faiths their moral grounding. In Islam, the sacred Kaaba represents the center of the world.  Mount Meru speaks to both Hinduism’s and Buddhism’s most sacred beliefs.

In Nepali, Mount Everest or Sagarmatha translates as “Goddess of the Sky” and in Tibetan, Chomolungma or “Holy Mother” (Keay, 2000). These mountains are sacred because, as the great religious historian Mircea Eliade (1991) explained many years ago, the mountain is an “axis mundi” or “the world’s navel” where we can both descent to the underworld and ascend to the heavens.

In A Short Hike (Developed and published by adamgru, 2019. Designer: Adam Robinson-Yu.)  you move upward. This game helps you explore the sacred, and no better protagonist for that journey than the bird Claire. Only birds fly to the mountains, we humans must climb. Claire is a personification for sure. As Claire, we learn various helpful human skills and obtain important tools that man must have to ascend the mountain, but we also experience the freedom of flight. We run, jump, climb, but best of all, we can glide. To glide is truly to be untethered by worldly concerns, the demands of materialism, the grip of the secular. You ride the wind, at one with nature’s spirit. 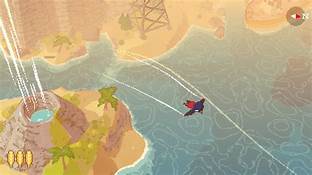 The game takes place in Hawk Peak Provincial Park on a small island.  This is a friendly world, a world populated by animals you can help and learn from. Again, like Alba, this world has no clock. We are in Shakespeare’s Forest of Arden (As You Like It, III ii), as we wander about, and leisurely explore; you get there when you get there and where you get to is where you end up. This is a pastoral landscape where time proceeds according to nature’s rhythms not man’s impositions and schedules. A reviewer for Eurogamer, Christian Donlan (2019) captures the game’s essential paradox, “…getting somewhere by going nowhere.” The island’s world is akin to Wordsworth’s Lake District, a world of childlike wonder. Ironically, Claire’s mission is to reach the island’s mountain top so she can get cellphone reception. A game about nature with a technological objective? Nothing tethers people more today, inhibiting any experience of transcendence, than the ubiquitous cell phone sutured to people’s hips and ears. Claire is waiting for an important call so she needs reception. Or does she?

No. For me the cell phone is a metaphor. The call comes not from the secular, but the sacred. That’s why the mountain matters. Today, students can get a simulated sense of transcendence by playing this game on their phone, but then the phone must be put down. The phone and the game enable an experience that transcends both. Claire waits for a call— a call from the clouds if you will. I am reminded of the distinguished philosopher/theologian Cornell West (2022) who recently differentiated a call to a vocation from a commitment to a job.

Cunningham: Is it the personal dimension that then creates, not an escape hatch, but sort of a parallel current to that?

West: Part of it is that, when you have a vocation, as opposed to just a profession, and a calling as opposed to a career, then you’re really trying to proceed in the spirit of integrity, and you’re going to find persons who also have that same sense of vocation, no  matter what color they are.

West criticizes the academic world for its thoroughly secular materialism. Professors who work a job, manage a career and compulsory publish are professionals, but insular.  How different is a calling, a vocation? In a vocation, you do not publish an article to achieve tenure or promotion, you deliver a message.2

As I have argued above, mountains serve as a location for receiving a call and then delivering a message. Nietzsche’s Zarathustra spent ten years in a mountain cave before coming out and descending the mountain- or going under as the text describes- and delivering his prophetic message about the ubermench (overman). Around a century later Reverend Martin King Jr. also went to the mountain top and delivered a prophetic message on 3 April 1968 the day before he was tragically assassinated about seeing the promised land. Dr. King was in Memphis, Tennessee to support the striking sanitation workers. His message was clear, the promise land could only be reached when true equality between the races had been realized.

The overman represents self-transformation, overcoming limitation, both self-imposed and externally enforced. As a country we are just now perhaps climbing out of the valley, but we are not yet near the promised land. We have not experienced the Claire’s freedom. We need to continue the hike upward. This small game, A Short Hike helps show the value of the climb, the importance of community, the respect of nature. Play the game, but6 then put the phone down so you can hear the call when it comes and hike.

1. Eliot’s poem implies that men are hollow because they are spiritually dead. For Elliott, living without spirituality meant living without purpose, devoid of any transcendent reality. The poem is in the same vein as The Waste Land (1922) in its apocalyptic tone and complicated imagery. The epigraph from Joseph Conrad’s Heart of Darkness published in 1899 reiterates the novel’s apocalyptic imagery, but in any case, both texts emphasize spiritual decay. For Elliot, World War I signaled a collapse of order and reason. Without a sense of the transcend to fill the void left by a destructive, meaningless war man was doomed to a unfulfilled existence. For Conrad, the void signaled the aftermath of colonialism, a world ravaged by greed leaving only the internal horror of an absurd world.

2. Cornel West has been a strong critic of the establishment and his letter for resignation from Harvard sounds his discontent with what he perceives to be Harvard’s institutional inertia, biases, market driven practices and politically correct thinking. You can read Dr. West’s resignation letter to Harvard on his Twitter account, @cornelwest from July 12, 2021, at 9:56 PM.