It has now been 5 months since Revolutionary Learning 2016 Inspiration and Collaboration through Games took place at the Roosevelt Hotel in New York City. In reflecting on that exciting event, I wanted to outline what seemed to be most effective and lest effective as material for other planning conferences in both education, games, and other education related fields. The conference world has reached near saturation point, so we need be careful and mindful in planning future events. All conferences require and benefit from keynote address and both our opening keynote by British game pioneer, author and entrepreneur Ian Livingstone, CBE and New York City educator Dr. Rebecca Rufo-Teper- a leading force of the Quest to Learn school were excellent. My only suggestion is careful thought on timing. 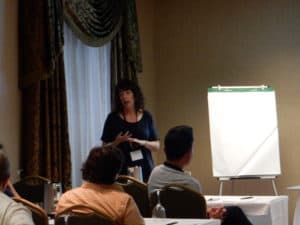 Closing keynotes often have diminished audiences and therefore Friday may be a poor choice for closing a conference- especially in a major city- let the audience have the weekend beginning Friday for fun if they want. What the two speakers brought that really added value were a transatlantic presence and the inclusion of K-12 educators with post-secondary educators. Barriers segregating audiences and disciplines needs to be smashed. Flat out.

All the tradition sessions went very well. It is always a challenge to balance the number and types of concurrent sessions. I think this balancing requires art, science and chance-and diverse audience demand even more careful thought than more monolithic audiences that many game conferences have. Length of sessions should match the content and not be standardized. What I do not like much are the 30 minute sessions as GDC or Games for Change- these are often too short to be useful. On the other hand, ignite session or 5 minutes, which we did not use, can be very beneficial. In retrospect, I would have given Coventry University’s Disruptive Media Lab 90 minutes because so few American audiences are aware of their many innovations in the digital space.

The onsite Game Jam conducted by Phoebe Elefante of the New York Film Academy and moderated by NYU’s Eric Zimmerman did lose participants over the three days, but such events remain worthwhile. A real challenge remains mixing professional designers with educators who lack design experience.

Educators seem to shy away or lack confidence when in fact they have the potential to be real innovators. Content experts have great ideas for games and they know exactly what does not currently work in the classroom and therefore demands a new approach so we must work diligently to partners these fields or educators and scientists with designers. I was especially pleased with the participation of a high school student from the New York City based Mouse project (supporting youth development in technology for underserved students) as a judge. This idea was given to me by Carole Wacey, VP of Education at WNET in NYC.  I think giving students (both high school and college) a more prominent role in these events can have tremendously beneficial results.

Our Board Game Lounge loosely modeled on the work of Shut Up and Sit Down and admirably organized by Scott Silsbe worked well. An area for registrants and speakers to relax chat and have fun is so much better than having people drift on the fringes of the conference between or after sessions. Small groups played games late into the night. I think with careful planning more can be done with these board games, but a certain informality should not be sacrificed. However, maybe slots at specific times where designers are available to speak with registrants or even a play session or talk on a board game like Freedom: Underground Railroad would be helpful.

A wonderful surprise was the positive response to the Breakfast Roundtables. These were small, informal sessions around an actual roundtable led by an expert on an area of interest to them such as Alternate Reality Games or Using Games with Disadvantaged and poor populations. These sessions need to be promoted better and given larger audiences- or scheduled not to conflict with each other too much- what really works here is the intimate environment, hands on possibilities and networking. I attended the round table on ARGs led by Randy Fugimoto from GameTrain Learning and we helped Dina Shoman, founder of inherQuests, think through a game on financial literacy for young girls. What could be better than that?

Probably, the arcade turned out to be the conference’s highlight. Bias aside, the Revolutionary New York Video Game Arcade really did strike me as one of the best I have seen. Four things helped make this an outstanding arcade. First, a brochure (duplicated on the conference website) designed specifically for the arcade by a great former student Marie Ferro provide all registrants a preview of each game to be displayed. Second, the focus.  We zeroed in on New York State video game industry and exclusively games for learning giving a us greater coherence than most arcades, which, after all are sponsor driven. Third, within the state, I featured New York’s three new digital hubs which are hosted at university centers across the state. The centers were created to serve as incubators and catalysts for the game industry in the Empire state. The universities are among the best in the entire country and their leadership provided the event with a terrific array of new games created by visionary young designers and design teams. Dylan McKenzie from NYU, Jennifer Hinton and Dr. Andy Phelps from Rochester Institute of Technology (RIT) and Helen Zhou and Ben Chang from Rensselaer Polytechnic Institute (RPI) chose the new university games they wanted to festival and I worked with colleagues from the three regions to also bring in other, more established studios and organizations to show some of their education video games. Fourth, the arcade had a dedicated time slot. Rather than have an open arcade that registrants could drop in on when they felt the urge, between sessions or during lunch, we carded out two hours from 5 to 7 PM on a Thursday evening and let the arcade be the sole event- no concurrent sessions, no nothing but the arcade. This strategic choice gave the developers the undivided attention they deserved. Participants and speakers had time to walk among the video games, play them and chat with the designers in a very personal fashion.

Finally, Senator Martin J. Golden, at the time chair of the state Senate’s Science, Technology, Incubation and Entrepreneurship committee and driving force behind the digital hubs introduced the arcade and the state’s vison for the game industry, but more importance he spent considerable time visiting the different designers, showing interest in their work and support for what they do. This high level pollical support cannot be overstated as games for learning or applied games require political/government support as well as financial support to succeed and their success, in turn, has a direct benefit for today’s and tomorrow’s students. Our future depends significantly on the vison, commitment and leadership of our young students. It is this last point that merits most attention and makes me and my many dedicated colleagues happiest to support.